Bookworm Wednesday: Frustrated and Worried, A Review of Claire-Obscure by Billie Hinton 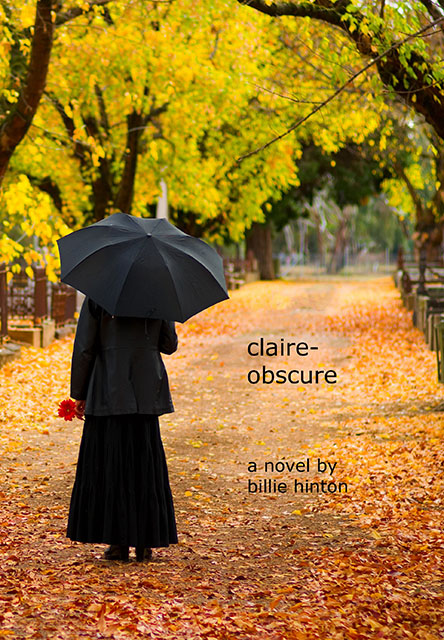 A couple months ago I mentioned that I had started reading one of the ebooks I had received for free through the Blog Tour de Troops event back in May.  This book was Claire-Obscure by Billie Hinton, and I said that I would no doubt have a new book review for you in a week or two.  And then… nothing.

Two months later… I have finally managed to finish Claire-Obscure and can now offer up the book review I promised all those weeks ago.

There were two factors that caused me to take so long finishing this book.  The first is, obviously, that it’s the middle of my first semester of my PhD coursework, and both time and energy are at an all-time premium right now.  So it’s really no wonder that it took me so long.  However, I actually started reading this book two weeks before the semester started, and I have read longer books in less time than that before.  So the real problem was that this book was very difficult for me to read.  This is not to say it’s a bad book, because it’s not.  But before I explain, let me give you a brief summary.

Claire-Obscure is about a young woman named Claire Caviness.  It is written in first-person present tense, and the opening lines, in Claire’s words, give you a good sense of her: “Dear Virginia Woolf, My name is Claire Caviness.  I am twenty-one years old, with an English degree and a job at a bookstore.  I am the only child of parents I rarely see.  My mother has never hugged me.  My father takes pleasure with men.  I am no longer angry about that, but jealous, because he does something I cannot.”  Yes, Claire writes letters to Virginia Woolf, telling the story of her life.  She collects words as if she is desperately seeking the right word to make everything better (and accordingly, a word and it’s definition open each chapter).  She buys and wears eccentric vintage clothes. We also quickly learn that as a teenager Claire was raped not once, but twice, and this is (unsurprisingly) the deciding factor in her relationships with men.

And as the book opens, she meets a man at an art gallery named Finn Weston.  Quickly, more quickly than seems possible (to her or the readers), she moves in with Finn, fancies herself in love with him, and becomes increasingly obsessed with him as she realizes he will not sleep with her.  He has gone so far as to give her her own room in his apartment, and he locks his bedroom door at night.  From here, things get more and more strange.  One of Claire’s friends kills herself, her female boss at the bookstore comes on to her, and she meets another man named Raoul at a club, who quickly places himself Finn’s rival.

Put simply, this book is the portrait of a woman in crisis.

What made it difficult for me to read, especially in the first half of the novel, is that I was continuously frustrated by Claire’s actions and choices.  I understood that the things she did were in a variety of ways reflections of the immense damage done to her, but that didn’t make me any less frustrated.  I wanted so badly to grab her by the shoulders, shake her really hard, and explain to her exactly WHAT she was doing, WHY she was doing it, and why it was the WRONG thing to do.  Because most of the time, she really didn’t know.  And because I am always extremely hyper-self-aware, I sometimes have difficulty staying calm when others aren’t.  So, every twenty minutes or so, I would get frustrated, growl at my Kindle, and toss it on the bed.  Then after a couple hours of this back and forth, I would give up entirely and not read again for a couple days.  Which meant it was going to take quite awhile to get through the whole novel.

What I want you to take away from this, however, is NOT that this is a bad book.  Rather, the fact that I was able to be so painfully frustrated with this character, should tell you something about how real Billie Hinton was able to make Claire.  I felt for her, I didn’t want to see her get hurt, and I didn’t want to see her do stupid things.  I was worried about her.  I wanted to jump into the novel and be the one friend who could figure out how to stop her and help her.

The two main male characters, Finn and Raoul, were also interesting, fleshed-out, and complicated characters.  But most of the time, I didn’t want to help them, I just wanted to smack them.  Hard.  If I tell you why, that will be giving too much away.  If you read it, you’ll see what I mean.

So, the characters are real and human and interesting.  The story, slow in parts, frustrating in others, and pretty intense towards the end, probably would not have kept me going if I wasn’t so invested in making sure Claire ended up some place better than where she started out (though, toward the middle, I was beginning to worry that I was reading a tragedy and hadn’t been warned).  It sort of felt like walking someone home because you want to make sure they get there in one piece.  The ending, while not precisely “happy” in the traditional “and she lived happily ever after” sense, was satisfying.  And I felt it was safe enough to leave Claire at her front door, about to go inside.

There is, as I discovered at the end of the book, a sequel called Signs That Might Be Omens.  But I’ll be honest, as much as I ended up liking Claire-Obscure in the end, I’m not sure I’ll pick up the sequel.  The ending of Claire-Obscure seemed complete enough, and I don’t feel a sequel is necessary.  And the short description of the sequel sounds a little like something a fan-writer would do when they felt the girl didn’t end up with the right guy at the end of the book.  I have no doubt this is a gross overgeneralization and is probably not fair to the sequel, and maybe I’ll give in and read it eventually, but it just seems unnecessary to me.