Hello everyone!  As promised, here is my post about the SERIOUSLY EPIC Tuesday I had last week.  I’ll begin with a few words to summarize:

Me, waiting outside the venue before the backstage tour started.

Now, even if you aren’t a Linkin Park fan, I think most people can agree that these words indicate a pretty awesome evening, yes?  And let me tell you: It was MIND-BLOWING (and ear-drum blowing).  One of the best things I ever done EVER.  SERIOUSLY.

So here’s the full story: I’ve mentioned before that I am a member of Grammy U, and that my brother is the Houston representative of Grammy U, which is how I had that other awesome experience of having dinner with some pretty big people in the music business.  Well, my membership to Grammy U has come to the rescue again!  SOMEONE in the higher-ups (and my brother and I are still trying to figure out who so we can thank them properly) ((UPDATE: We have confirmed it was Theresa Jenkins, Senior Executive Director of the Texas Chapter who arranged for the tickets)) arranged for a few backstages passes to be made available for the Linkin Park concert in Houston.  My brother, as the Houston rep, was sent the info and asked to find some other Grammy U members in the area who would like to go (of course, I was first on the list). 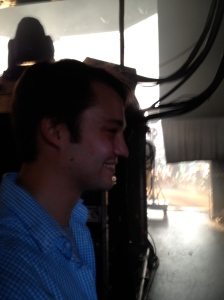 My brother, listening to the awesome conversations.

We ended up with seven people: my brother and myself, Sofia (who works my brother and is a manager at Sugarhill Studios), fellow UH student Danny (I’m not giving last names), two guys from Austin – Alex and Mark, and Eric Jarvis – the President of the Texas Chapter of The Recording Academy. 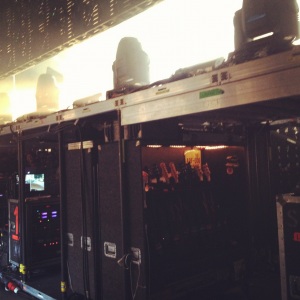 Behind/beneath the main stage. LOOK AT ALL THOSE GUITARS.

So, we’re thinking: backstage passes, that’s pretty awesome.  We’ll get a tour, maybe get to meet some of the road crew, etc.  And then we’ll see the concert.  And we assumed we’d get pretty good seats too, but nothing too extravagant.  WE HAD NO IDEA.  IT WAS SO MUCH BETTER.

The tour manager for Linkin Park, Cory, was the one who gave us the tour.  We got to see the set-up inside the Cynthia Mitchell Woods Pavilion, where the concert was held.  We not only got to meet, but actually had a lengthy discussion/question-and-answer session with Linkin Park’s sound guy, the head carpenter (which is a bit of misnomer, because he’s not JUST a carpenter, he’s in charge of all the set up for the entire freakin’ stage), and the director who does most of Linkin Park’s music videos (who has, by the way, also worked with Backstreet Boys, Britney Spears, and Christina Aguilera, just to do some name dropping). (And they were all so NICE!)

Looking out into the audience from backstage, in between openers.

We were taken on/behind/beneath the actual stage while the crew was taking down stuff from the first opener (Mutemath) and setting stuff up for the second opener (Incubus).

Then we were taken to catering, where they had an awesome buffet spread, and had dinner with the road crew.

And THEN we were taken out to wait for Linkin Park to show up.  There was a big group from the Linkin Park fan club (LP Underground) who had obviously paid a ton of extra money for a group photo/autograph session with the band.  Cory kept us to the side, and then the six of us were allowed OUR OWN group photo with Linkin Park.  We managed to get autographs from four of the six members (there was a small mix-up and we missed getting autographs from Joe Hahn and one other).  More importantly, however, is that when Chester Bennington and Mike Shinoda (the two I REALLY REALLY wanted) came to the end of the line to give us autographs, they actually STAYED and TALKED to us.

I just really like this shot of the light coming through the slats beneath the stage. ^_^

Mark, with Chester and his crazy sprite-tea-pedialyte drink.

Chester stayed for about five minutes, and told us about his drink.  It looked like beer, but he assured us that it was in fact Sprite, Pedialyte, and Lipton tea (I think there was tea too…).  And seriously, even though I’ve seen interviews with Chester before, it still shocks me how quiet and unassuming he is in person, compared to the screaming BEAST he becomes on stage.  And then Mike Shinoda actually stood and talked to us for about FIFTEEN MINUTES.  Asked us about Grammy U and our interests and made cheesy jokes and was just generally really nice and really awesome.  My brother and I kinda sorta idolize him (as much for Fort Minor as for Linkin Park, and because we really identify with his songs about being Japanese-American, as my brother and I are as well), and we were a bit tongue-tied around him.  But, folks, it was SO AWESOME.  SO AWESOME. 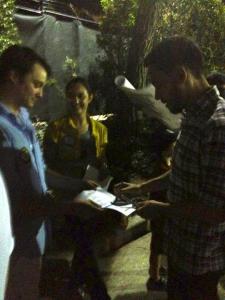 Me, my brother, and Mike Shinoda

Mike Shinoda in the checkered shirt. Then, from left to right: Alex, Mark, Eric Jarvis, Sofia, Danny, and my brother. 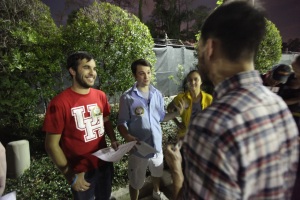 Danny, my brother, and me, with Mike Shinoda

Finally, when the band had to go inside to get ready to perform, we said goodbye to Cory and went to find our seats.  Only to discover that our seats were, in fact, FRONT ROW SEATS.  There was a small pit area, an empty space, with room for handicapped seating, and then US.  We were also off to the right slightly, so were practically RIGHT IN FRONT OF THE SPEAKERS.  IT WAS MIND-BLOWING.  (And ear-drum bursting).

Danny, Sofia, Mark, my brother, and me in our front row seats.

And to say the performance itself was fantastic would be a seriously criminal understatement.  My brother and I have seen Linkin Park in concert before, when they came to Houston in 2011, and (while I cannot speak for my brother) I think they were even better this time around.  For one thing, last time Chester seemed to be having a bit of trouble, and was often flat.  Now this happens in live performances, and I didn’t much care, but it was still nice that he didn’t seem to have any problems at all this time.  His pitch was pretty damn spot-on, especially considering it was an outdoor stage, live performances are RARELY perfectly on-pitch, and his screaming was even more INSANE than usual.

The next day, my ears were still ringing, and I could barely speak because I had done so much screaming and cheering.  And then I had to go to my first grad class of the week that afternoon, and my professor is on my facebook so she’d seen that I’d been at a concert until like midnight, and she laughed when I croaked a lot when we had to go around the room and introduce ourselves. 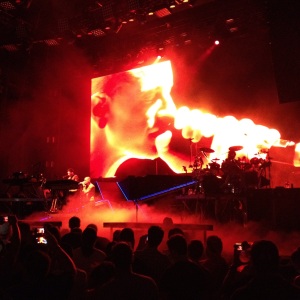 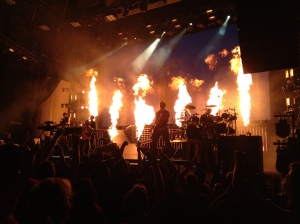 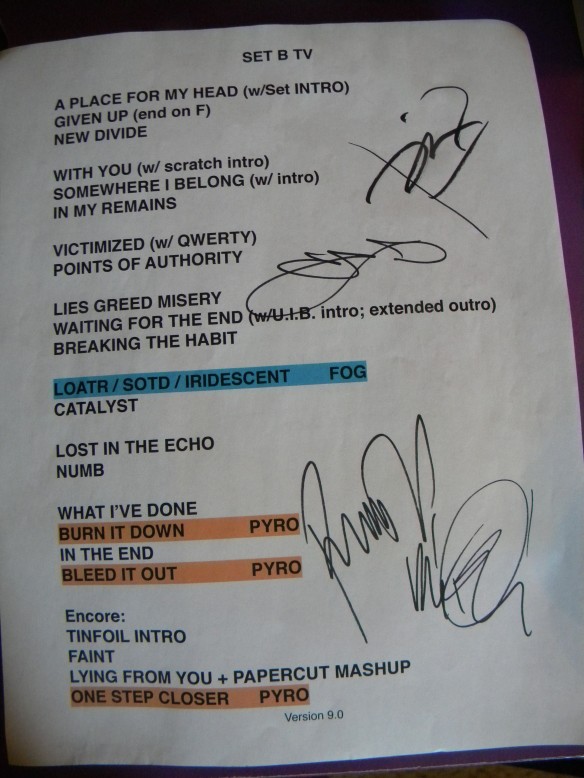 My autographs from Mike Shinoda, Chester Bennington, Dave Farrell, and (I think) Rob Bourdon. And not on just ANYTHING, but a SET LIST from that night’s performance!

So there you have it, folks.  ONE OF THE BEST NIGHTS EVER.  Once again thanks to my membership with Grammy U.  Best $50 I’ve ever spent.

Update #2: And somehow in the middle of all that photobombing, I managed to forget to include the official group photo we got with the whole band. So here’s that one: