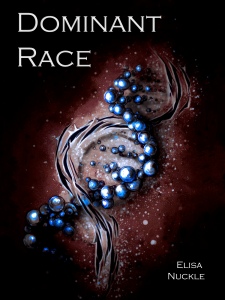 Where I Got It: bought a Kindle copy

Dominant Race is a novella by Elisa Nuckle, one of my blog and Twitter buddies and a fellow Houstonian.  It is the first in a series about a race of genetically modified humans who have been spliced with various animals.  Dominant Race focuses on Lilia, a wolf modified who leaves the safety of her family’s cabin hidden in the woods in order to help a modified militia that includes her love interest, Avari.  The modified militia faces enemies on two sides: the normal humans who fear and sometimes oppress the modified, and Sanders – a rogue modified who kills humans and modified alike in his crazed pursuit of war.

The premise of this novella is intriguing and fun.  Genetic modification is a subject I find absolutely fascinating, and it can usually make for some cool stories and fun characters.  The dystopian setting was also interesting.  The way Elisa took American city names and deconstructed him (like Neyork, for instance), and also made mentions of “old” technologies and customs throughout the story was a nice touch.

The main character, Lilia, was likable and easy to relate to.  She’s feisty, stubborn, and intelligent.  I always like tough female characters, and Lilia fills the role nicely.  There is a point near the end where she behaves in a way that seems out of character to me, even given the extenuating circumstances of the scene, but for the most part she is a consistently-written and enjoyable character.  You’ll definitely be rooting for her.

Okay, the basic idea of the plot works well for the most part, but I think it suffers from its length.  I really believe this story needed to be a full length novel rather than a novella.  There is too much going on too quickly, without enough exposition or description, and with too many character names floating around, attached to secondary characters that are sometimes fine and sometimes just don’t have enough description or importance attached to them for me to keep track of everyone.

I think the novella as a whole should definitely be decompressed, as it were, with a little more exposition and description here and there, a bit more space between events for the reader to sort through what’s happened and who’s been introduced and where its going next.  Still, the first two-thirds of the novella are manageable, and were certainly still interesting enough to keep me reading.  However, the last part of the novella, Chapter 14-18 to be exact, were very difficult for me to read.  I had to re-read a few sections several times to make sure I’d understood what had just happened.  And while SOME of that may simply have been my fault for reading too quickly or something, at least some of it could have been helped by slowing down the prose a bit.  Things sometimes jumped from one sentence to the next without enough concrete description.  And the appearance of at least two characters is so sudden and without any kind of foreshadowing that they felt a little too “dues ex machina” (or even non sequitur) for my taste.

As for the love sub-plot: it was… okay.  There was some effort to develop the relationship between Lilia and Avari in a natural way, rather than having them fall into instant lust.  But I don’t feel like I know enough about Avari and why Lilia would love him, for it to completely work for me.  He’s also out of the picture for a good chunk of the story, and their reunion is just a touch too easy to be entirely believable.  But, again, I think much of this is a problem of the length.

I know the “What I Don’t Like “ section is a quite a bit longer than the “What I Like” section is, but I really do think most of the problems with this story could have been solved by simply making it longer and more detailed.  With more time/space to develop the characters and relationships, to bring in more description and more transition from one plot element to the next, the interesting premise could have been a much stronger story.  However, I think the intriguing premise and the likable main character are able carry a lot of the weight of the problems.  Dominant Race is an admirable first effort, and the world-building is interesting enough that I will be back to read the next installment in the series.  I’m really looking forward to watching Elisa Nuckle grow.

Please check out Elisa Nuckles’ blog, and the page for Dominant Race, with all the options for buying.