Last Monday, I started my personal  SciFi Top 10 list with Part 1, which included numbers 10-7.  This Monday I present Part 2, with numbers 6-3.  And next Monday, I will finish off the list with the first and second places.  If you missed the beginning of the list, I suggest you dash back real quick and skim that.  You can find it here: Top 10 SciFi Television Shows, Pt 1.

Now, before I get into it, I feel I should warn some people about something.  I am about to incur the wrath of many people, but I’d like a chance to preemptively defend myself.  Battlestar Galactica is NOT on this list.  This is not an intentional insult to any fans.  I simply have NOT seen it, and so can’t legitimately make any claims about it one way or the other (when I say I have it seen it, I mean the new version; I watched the original and enjoyed it as a kid, but still wouldn’t put it in a top 10).  I have heard it is very good, and I believe it.  But folks, I’m in grad school, and I simply have not had the time to watch it.  I’ll get around to it one of these days, at which point I might have to change my Top 10 list.  Until then, however, please do not be insulted, okay?  Okay. 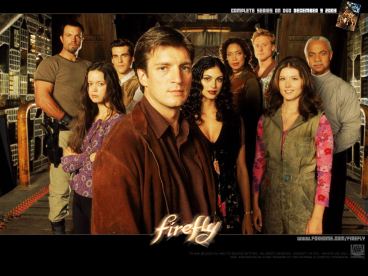 Speaking of incurring the wrath of fans… some people are going to pissed that Firefly is not higher up the list.  As I was working on the list, I wrestled with this show; it was both higher and lower on the list at various points.  I finally settled on #6 because it is an fantastic show, and it definitely deserved to be higher than the bottom 3, but I cannot make the argument (as some people have tried) that it is the best scifi ever.  That is not to say, however, that it isn’t completely awesome.  Because it is.

Created by Joss Whedon of Buffy the Vampire Slayer fame, Firefly takes place in a future where humans have colonized many planets.  The “core” planets are high-tech, wealthy, and governed by the Alliance (a mix of American and Chinese culture), but the out-lying planets are reminiscent of the pioneer culture of the American West.  Before the show starts, there was a war between the Alliance and the rebel “Browncoats,” who tried to halt the Alliance’s power over the outlying planets.  The Browncoats lost.  As the show opens, former Browncoat Mal Reynolds captains the firefly-class spaceship Serenity, with a crew: fellow Browncoat Zoe, Zoe’s husband and the pilot, Wash, engineer Kaylee, gun-hand Jayne, the Companion Inara, the preacher Book, and Simon and River – a brother and sister on the run from the Alliance.  Firefly only lasted 13 episodes, plus an awesome movie.  The mixture of spaghetti western with space opera was a brilliant marriage of styles/themes that led to a fascinating and detailed world construction, and some truly entertaining characters.  The dialogue, as always with Whedon, was sharp, snappy, fast, and often hilarious.  The production values — especially the more movie-like camera work — were highly impressive. And this little show led to a huge fan following and a reimagining of what could be done with scifi.

I honestly don’t know how any list of the best scifi tv shows could NOT include The Twilight Zone.  The Twilight Zone was created by Rod Serling, one of the most influential people in early television, who had serious love for science fiction and horror, and strongly believed in the power of scifi to reveal social problems and promote social change.  The Twilight Zone, as I assume most people know, was a series of individual, self-contained episodes with scifi, fantasy, and horror themes, which usually ended with a surprising, ironic, or macabre twist.  The original series ran from 1959 to 1964, and spawned two revivals, one from 1985-1989, and one from 2002-2003.

As a sign of how impressive and hard-working Serling was, he wrote a full two-thirds of the 156 episodes of the original series.  As a sign of how impressive and serious the show itself was, the other writers including some of the biggest names in scifi and horror, including Charles Beaumont, Earl Hamner, Jr., George Clayton Johnson, Richard Matheson, Reginald Rose, Jerry Sohl, and two of the most brilliant prolific scifi writers ever: Ray Bradbury and Harlan Ellison.  These writers often used scifi as a vehicle for social commentary, using plot devices, styles, and implicit argument to get past the censors of the time who often removed any hint of social commentary from mainstream dramas.  Some of the most popular themes were nuclear war, McCarthyism, prejudice, mass hysteria, the dangers of scientific advancement, etc.  The Twilight Zone gave birth to some of the most iconic and most-parodied scenes in scifi tv, including but not limited to the infamous scene of William Shatner spotting a gremlin on the wing of a plane in “Nightmare at 20,000 Feet.”  However, I think my all-time favorite episodes, and two of the most famous are: “The Monsters Are Due On Maple Street” — which shows the lengths humans are willing to go to when they think they are in danger (and asks whether the rumored aliens are the residents of Maple Street are the real monsters), and “It’s a Good Life” — in which Billy Mumy (Will Robinson on Lost in Space and Lennier on Babylon 5) plays a child who terrorizes a community with his psychic powers.

This show gave necessary space for some of the biggest writers of the time to try new things and make important social critiques.  It was new and original and provocative.  It is simply impossible to over-estimate the importance and influence that The Twilight Zone had on scifi.

Yes, the X-Files.  It HAD to make the Top 5, don’t you think?  Everyone (I think) knows the story.  FBI agent Fox Mulder is obsessed with the X-Files, a group of unsolved cases involved unexplained or paranormal phenomena, which are largely ignored by the rest of the FBI.  Mulder believes in aliens and conspiracy theories and a variety of other paranormal events.  His partner, Dana Scully, who is originally sent to monitor Mulder and report back to her superiors on his behavior, is a medical doctor, a scientist, and the quintessential skeptic. Some of the overarching plot-lines of the series include: an enormous conspiracy to cover-up impending alien colonization and experiments to create human-alien hybrids, clones, and super-soldiers (among other things), as well as Mulder’s continuing search to find his sister, whom he believes to have been abducted by aliens as a child.  At the same time, the show also held to the new-monster-every-week format.

This show had some of the fastest, wordiest, most intelligent dialogue of any show ever.  Though some people (my mother included) complained that it was almost nothing BUT talking, it also had intricate plot-lines, some very intense, exciting, action-oriented episodes, and one of the most complex tv mythologies ever thought up (though Fringe is trying to give it a run for its money).  It ran for 9 seasons (the last of which was, admittedly, a bit weak in parts), produced two movies, and created an enormous cult following that comes close to rivaling that of Star Wars and Star Trek.  It made the phrases “I want to believe” and “The truth is out there” and “Trust no on” cultural touchstones, it gave us some of the most recognizable scifi (or drama) characters ever: Mulder, Scully, The Smoking (or Cancer) Man.  It touched a powerful cultural nerve, an obsession with the supernatural, with UFOs, and most especially with government conspiracies.  It became one of the biggest cultural icons of the 90s, and its legacy, I think, will endure for quite a long time.

Anyone who knows me knows how much I love this show. I could go on for pages and pages about how much I love this show and why.  But this post is getting ridiculously long already, so I’m going to try to keep it short.  Babylon 5 was a scifi series that was created by J. Michael Straczynski and ran for five seasons, from 1993 to 1998 (the pilot episode having aired in 1993, but the first regular season not beginning until a year later).  Babylon 5 focuses on a deep space station called Babylon 5, which is neutral space and used an a hub for alien diplomatic relations with humans and each other, as well center of commerce, culture, and science.  The main characters include the Captain and command crew of the station, as well as several of the more important ambassadors who live on the station.  While many of the episodes follow the general “new adventure every week” format, the vast majority build a heavily connected story arc that deals with the corruption of Earth’s government and an imminent attack from an alien species with enough destructive power to effectively wipe out the entire universe.

J. Michael Straczynski envisioned this series as something vastly different from the only other serious scifi series around: Star Trek.  Whereas Star Trek is eminently optimistic — with a fairly “pure” working government, a claim to the near-eradication of sickness and poverty, etc — Babylon 5 is very much a reflection of all the problems humans have always had: corruption, oppression, war, prejudice, poverty, addiction, etc.  Straczynski made several promises: the show would have a reasonable budget (and indeed, always managed to go under budget), it would take a serious adult approach to scifi (and would therefore have no children or “cute” robots), and it would have a thoroughly planned well-written and executed overarching plot (that would not leave any loose ends).  To that end, Straczynski wrote 92 of the 110 episodes himself, and when he brought in other writers, they were told about the overarching plot-lines so that everything could be tied together effectively (incidentally, Harlan Ellison was a creative consultant on the show and is credited with 2 episodes).

And Straczynski succeeded.  Babylon 5 contains some of the most human, complex, fully-realized characters in television to date — including but not limited to Susan Ivanova, Delenn, John Sheridan, and probably the two most complex and dynamic: G’Kar and Londo Mollari.  The plot is intricate, vast, intense, entertaining, and ultimately concluding with all the wrapped up satisfaction of a well-plotted novel.  One friend of mine has argued that Bablyon 5 is the most epic (in terms of scale and the consequences of the conflicts) of any story ever.  I’m not sure I would go that far, but with alien races capable of bringing about total oblivion, and a collaborative force of something like a hundred difference alien species trying to fight them (and looking like ants swarming a tiger), I can certainly see how someone might think so.  I might at least be the most epic scifi around.  Possibly.

So there, Ladies and Gentlemen are numbers 6-3 of my Top 10 Scifi TV Shows Ever.  I’d like to take a second to name a few honorable mentions: V: the Series, Earth: Final Conflict and Andromeda (both series created by Gene Roddenberry of Star Trek fame, and produced by his wife Majel Baret after his death – both of these series had a lot of potential, but for a variety of reasons just could not be as good as Star Trek).

I’m assuming everyone can guess what first and second place will be, yes?  If not (and even if you can guess), please come back next Monday to see how I wrap things up!  And in the meantime, sound off! What do you think of the list so far?  Which of your favorites am I missing?  (If one of them is Battlestar Galactica, I refer to the explanation at the top, and beg that you don’t get too vitriolic.)